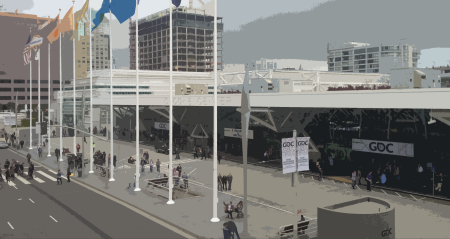 Attending my first GDC has been a career highlight to speak off, it was a great show packed full of great companies and people.

Over at Unity land, we had a huge booth which hit you when entering the expo arena, sitting between giants Sony and Nintendo. We had lines of demo machines showing off some great Unity projects and games, benches and screens for our presentation area and a reception desk to ensure we could direct you to the right people, oh and we had really nice comfy carpet to help protect our feet.

A particular highlight of the week for me was seeing a group of indies begin game jamming on one of our demo machines, the project was some crazy 3d sheep physics based game where as the player you controlled the sheep by jumping & tumbling around to pick up objects, the movement of the sheep made the game quite amusing.

The game shortly became a talking point between some of us, intrigued to see how the game would progress over the 2 / 3 days they had, adding more graphics and control tweaks to it as they went, never know what happened to the project, hopefully they copied it of the machine and will continue to do something even more crazy with it.

One of the other main excitement and highlights for me was meeting and talking to users of Unity, them asking me for help with their projects and as well as technical questions, some experiencing bugs with their projects and a majority of others asking more about our new features or how to use certain aspects of them. I learn’t a lot from speaking to you guys, I get to see how you use our product and features, as well as hearing about the sorts of questions asked.

Another cool thing was one of our employee’s showing the WiiU support and how easy it is to set up the additional camera for both displays.

Lot’s of other cool things were happening, but until next time, catch you later folks.